In the mood for Madrid

A fabulous, passionate and tumultuous city, you’ll certainly, fall in love with. A city that deserves to be experienced at least once in a lifetime 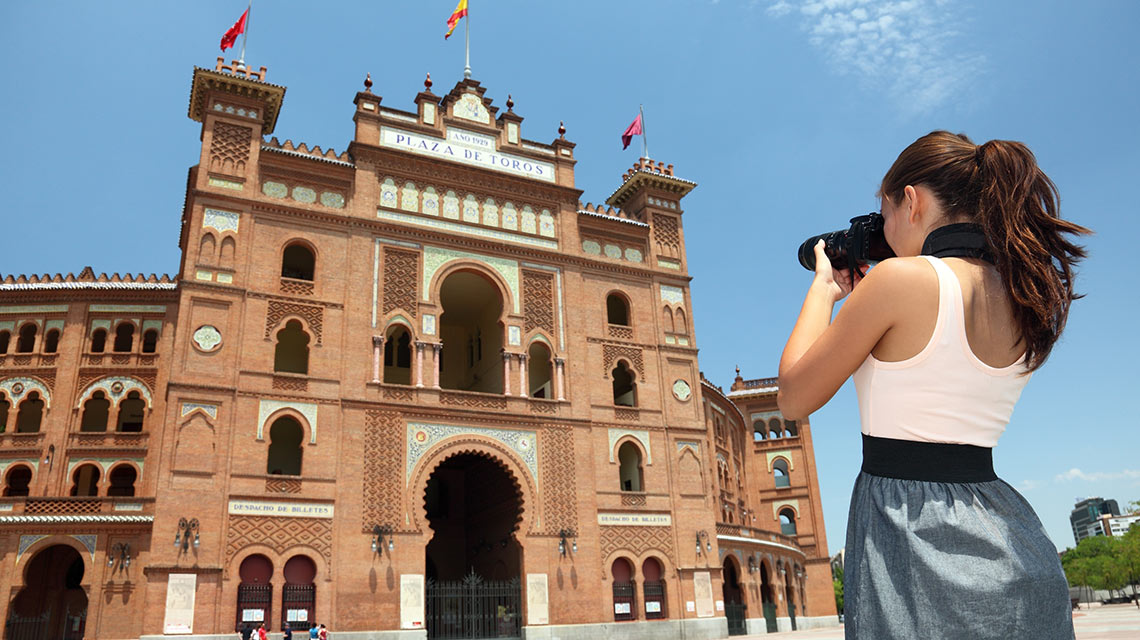 Although, somehow surprisingly, it doesn’t have yet Barcelona’s touristic reputation, Spain’s capital, the geographical center of the Iberian Peninsula is, simply, mind-blowing – and for all the right reasons. Elegant and cosmopolitan, Madrid stays true its royal stature, as well as its fame (yes, the same one as NY): the city that never sleeps. Otherwise, Madrid obliges and surprises. And it has plenty to surprise with: with bulls, and matadors, and the corridas, for those who seek adventure. With chocolate y churros (chocolate donuts), tapas, jamon, sangria, cerveza (beer) or a glass of tinto Verano (a red summer wine) – for any pretentious gourmet. With Goya, Velázquez, El Greco, Dali, Miro or Picasso – sheltered in museums, in which you can wander for days in a row and not get tired – for even the pickiest art lover.

With flamenco. With music and dancing. With that dramatic light that shines on you no matter the hour of day, and which you’ll find in any Madrileno’s temper. With wide boulevards, iconic buildings and impressive facades – always full to the brink (as if nobody is at home, all just rushed to the streets), beautifully frantic, continuously on the move. With sensational parks: real cities within the city. With imposing, truly imperial plazas. With narrow streets, authentic labyrinths, packed with bodequitas, bars and restaurants, small picturesque shops – an always-surprising mosaic. With fun and traditional food. With that unleashed nightlife, that never seems end, in the Malasana or Chueca quarters. With chic boutiques, avangarde fashion and design shops in the now cool Triballo district.

With La Movida Madrilena (La Movida Movement or Scene of Madrilena), which occurred as a counter-reaction to the four decades of dictator’s Franco regime, and that, in many ways reshaped and brought to life the artistic and cultural verve of today’s Madrid: an animated, infinite puzzle, impetuous, vividly colored and hot-blooded city – just as a Pedro Almodovar film. A city that wants to be unveiled, savoured, seen and felt. With its hot-blooded – or seldom cold – feel to it, yet always hustling and bustling, Madrid lives and breathes life.

Find below 10 places that I think you should experience, especially if you’re on your first visit to Madrid. Let’s talk, stay in touch, for the following one :).

1. Gran Via
New York has Broadway. Madrid has Gran Via (the Spanish Broadway). The famous boulevard, opened in 1918, spans over nearly two kilometers, and is an architectural gem. It starts from Calle de Alcala, near Cibeles Plaza, reaching, at its western end, Plaza de Espana. Hotels, restaurants, theatres, banks, iconic buildings – Edificio Telefonica, Madrid’s first skyscraper (the tallest in Europe, in its time), Edificio Metropolis, Edificio Grassy, Palacio de Prensa or Cinema Callao – they’ll leave you breathless, and always looking up. Leaving aside that Gran Via is a magnet for any shopping amateur. So be sure to prepare your wallet! 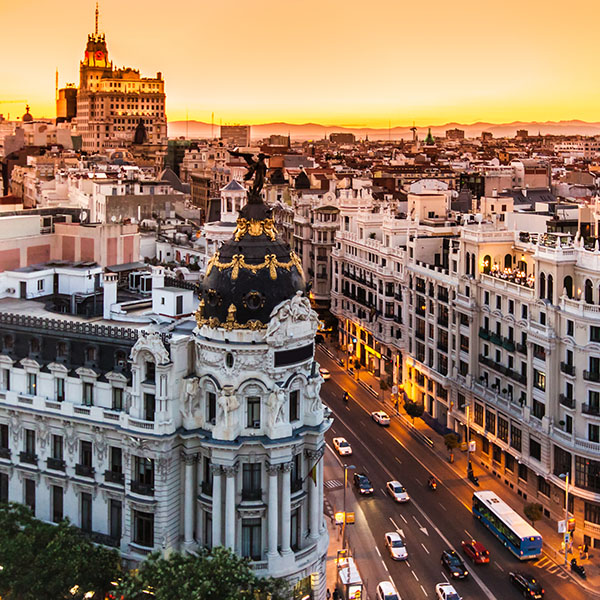 2. Parque del Buen Retiro
Parque del Buen Retiro or, simply, El Retiro stretches over 130 hectares – thus to say it’s just a park would be an understatement. Besides being a green oasis in the middle of the city (more than 15,000 trees!), it’s a favorite place not only for tourists, but also for locals. And that’s because there is so much to do: you can simply wonder around, rent a boat for relaxed tour on the lake, or enjoy the endless gardens, monuments, sculptures or fountains. Don’t miss the superb iron and glass Crystal Palace, surrounded by a lake and a garden that rivals anytime any famous English garden; then, the Valasquez Palace or the Rose Garden (La Rosaleda). 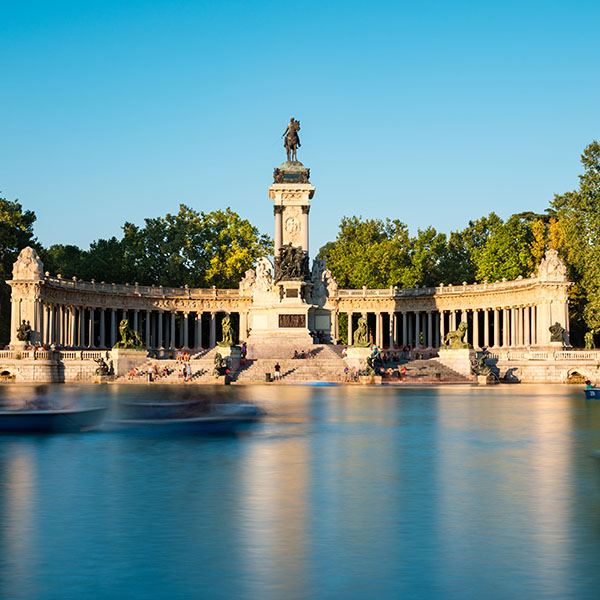 3. Prado, Reina Sofia and Thyssen-Bornemisza Museums
Meaning the Golden Art Triangle of Madrid. The Prado National Museum needs no further introduction. It’s one of the most famous museums in the world, hosting masterpieces of an inestimable value. Almost 9000 of paintings, 5000 engravings, drawings, sketches, and 1000 sculptures. But at Prado lies the most important collection of Spanish painters, the absolute stars being, perhaps, Diego Velazquez, Francisco Goya or El Greco. The Thyssen-Bornemisza is another temple of chefs-d’oeuvre spreading over 700 years of European Art History (XIII-XX) – let yourself spellbound by Van Gogh, Cezanne, Durer, Gaugain, Manet… And finally Reina Sofia, Spain’s MoMA, will charm you with Miro, Braque, Kandinsky, Magritte, the photographs of Brassai, Diane Arbus or Robert Capa. And, of course, Picasso’s Guernica. 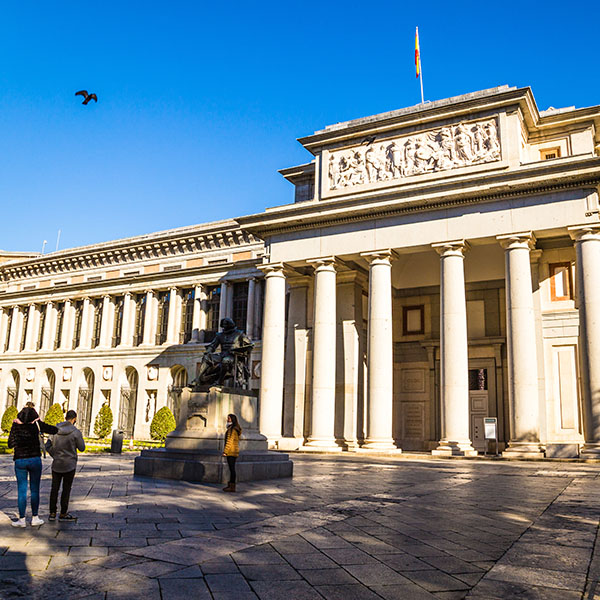 4. Plaza Mayor
The central market of Madrid, close by Puerta del Sol – the kilometer 0 of Madrid –, is possibly the best place to enjoy a coffee or a cold beer or to have dinner. Dozens of terraces tempt you with the most amazing dishes and attractive offers. Touristic, maybe, yet the atmosphere makes every penny worthwhile. In the market – a rectangle-shaped plaza, flanked by residential buildings, with no less than 237 balconies looking back at you – stands proudly Felipe III’s equestrian statue. The Panderia Building (Casa de la Panderia), once The House Of the Baker’s Guild, is undoubtedly the most impressive edifice of the market. 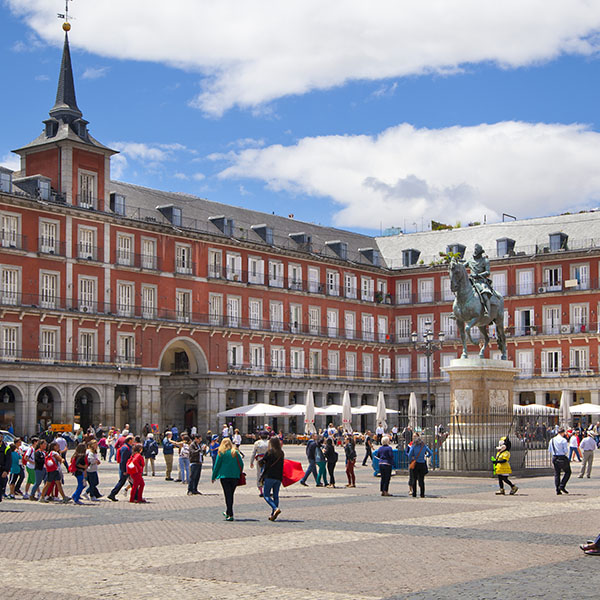 5. Plaza de Toros De la Ventas
When in Madrid, do as Madrilenians do. Yeah, it’s the famous corridas arena. Inaugurated in 1931, it becomes really animated during the Feria de San Isidro, the celebration of Madrid’s saint protector. Between May and July, Las Ventas gathers Spain’s most famous bullfighters. Even if empty, the arena is monumental. Otherwise don’t miss The Bulls Museum is an interesting incursion in time, in the history, and the traditions of the corridas. You’ll find here a variety of memorabilia that will remind and reveal you the controversial custom of bullfighting: old posters, famous painting and engravings, to matadors and their exquisite costumes, trivia, curiosities, very old pictures. 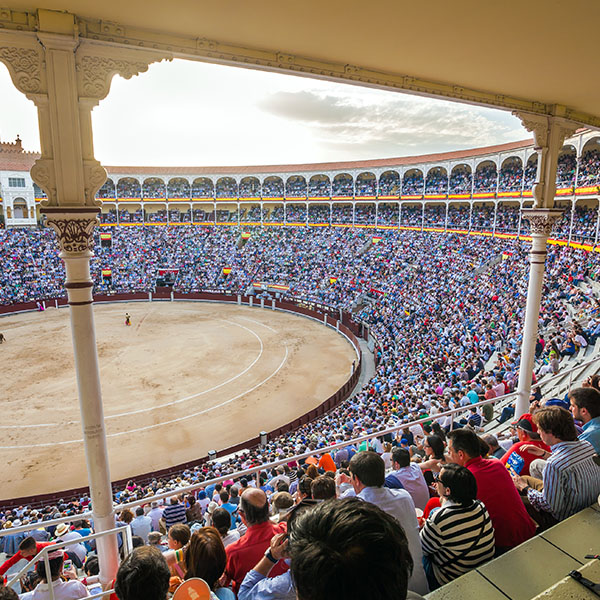 6. Palacio Real
The King and Queen’s residence, until 1931 – today the official residence of the monarchy, yet used exclusively for state ceremonies – is, literally, grandiose: built in a sober baroque-neoclassical style, it has has a ground surface of a whopping 135,000 square meters (thus, being the largest in Europe!), and 3418 rooms. Part of them can be visited and, yeap, I truly recommend it: you’ll have the chance to feel like a king or a queen. If you get here, admire the Campo del Moro’s gardens, behind the palace, or roam through the gorgeous Sabatini Gardens. 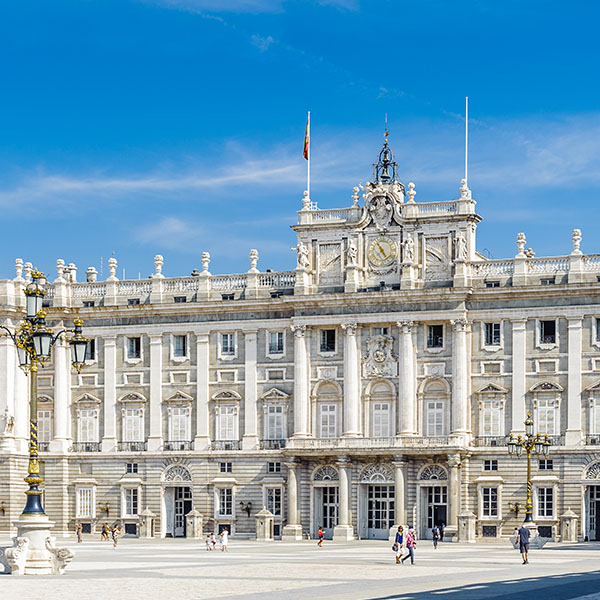 7. Plaza de Espana
Plaza de Espana, where Gran Via ends, on the boulevard’s western side, is herself stupendous: the amazing park, the majestic fountain and the Cervantes monument, the Statue of Don Quixote and Sancho Panza, plus, on top, the Edificio Espana and Torre de Madrid – two of the most refined and illustrious skyscrapers in Madrid. 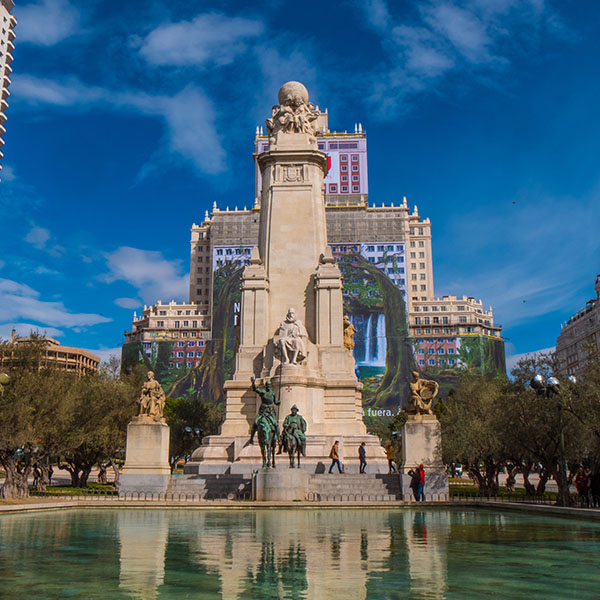 8. Estacion de Atocha
No, you don’t have to catch the train. And, no, this is no ordinary train station. The impressive glass and iron building, a vast industrial structure, might be sensational on the outside, but, please, wait and see the inside. It may seem strange, but the Atocha station, the first in Madrid, is no longer meant for waiting or catching trains, but, especially, for its luxuriant tropical garden. The 4000 square meters of tropical garden are, literally, planted on the old, decommissioned train rings and platforms: hundreds and hundreds of species of trees and flowers, palm trees, turtles, fern, fish, cactuses make out of the most exotic scenario I’ve seen… it’s like entering a botanical garden or being in one of Madeira’s finest. 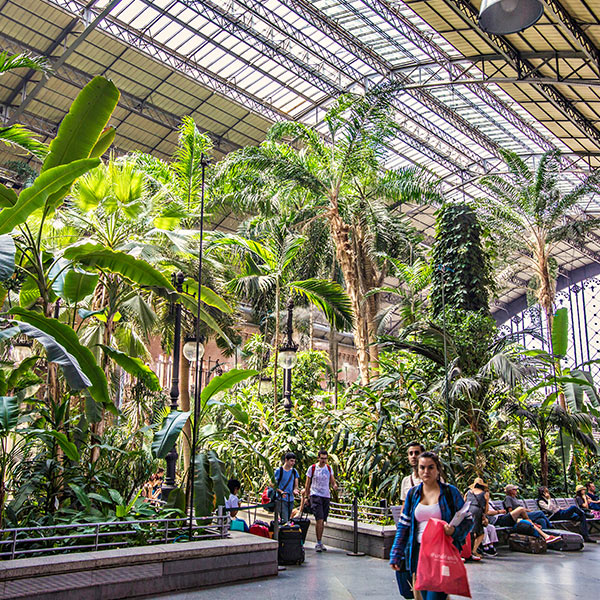 9. Rastro flee market
Posters, stamps, lamps, cameras or postcards, magazines and old records, typewriters or pens; curiosities, bargains or valued antiques… or anything else that you can imagine – you’ll find in El Rastro, the famed, traditional Madrid’s flee market. It takes place every Sunday or on any national holiday. You’ll find it easy enough: it’s just south of the La Latina subway station. Then again, on any Sunday morning you just to say Rastro, and any madrileno will know how to guide you. Because, most likely, they’re are heading there too, in search of a long lost treasure. 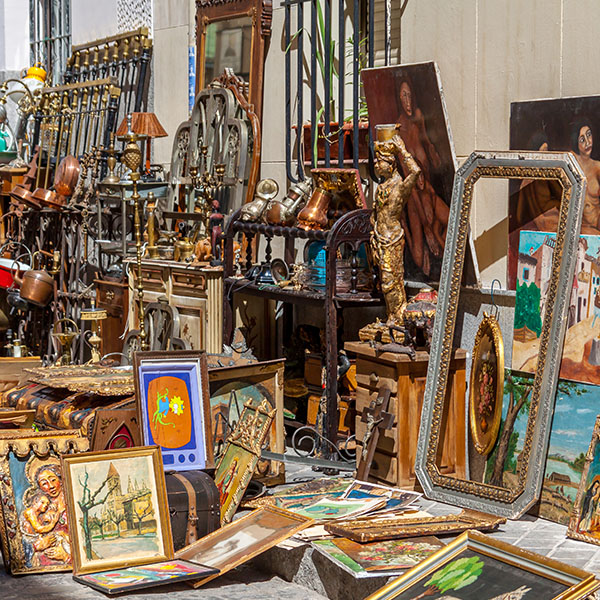 10. Mercado de San Miguel
Once you step into the covered building in glass and iron, you want everything. It’s best to get there when you’re not thirsty or hungry, as, believe me, you’ll experience a sudden craving for a glass of Rioja wine, or a sangria, or the endless tapas, shrimps, garlic prawns, pickles, oysters, cheese, octopus, desserts, fruit… I truly don’t think there’s anything you can’t find here. For instance, I would’ve wanted to take a whole jamon iberico in the suitcase, like back home. And, again, I could have tried all of the goodies there. Because, whatever would anyone might ever say, Madrid is so damn tasty. Me gusto mucho! 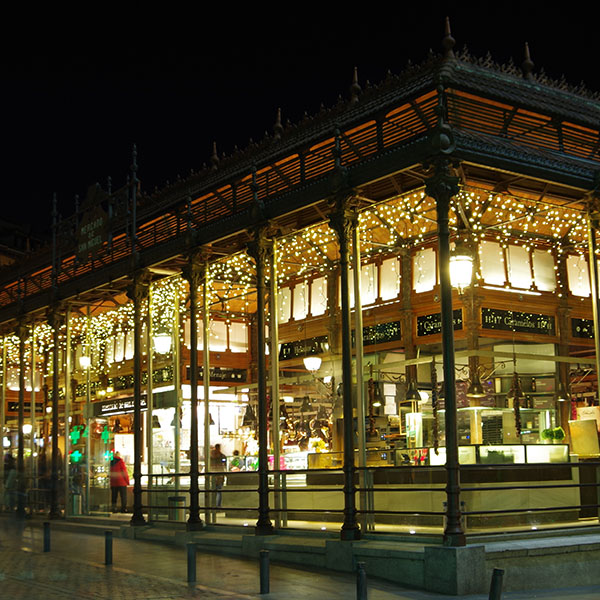 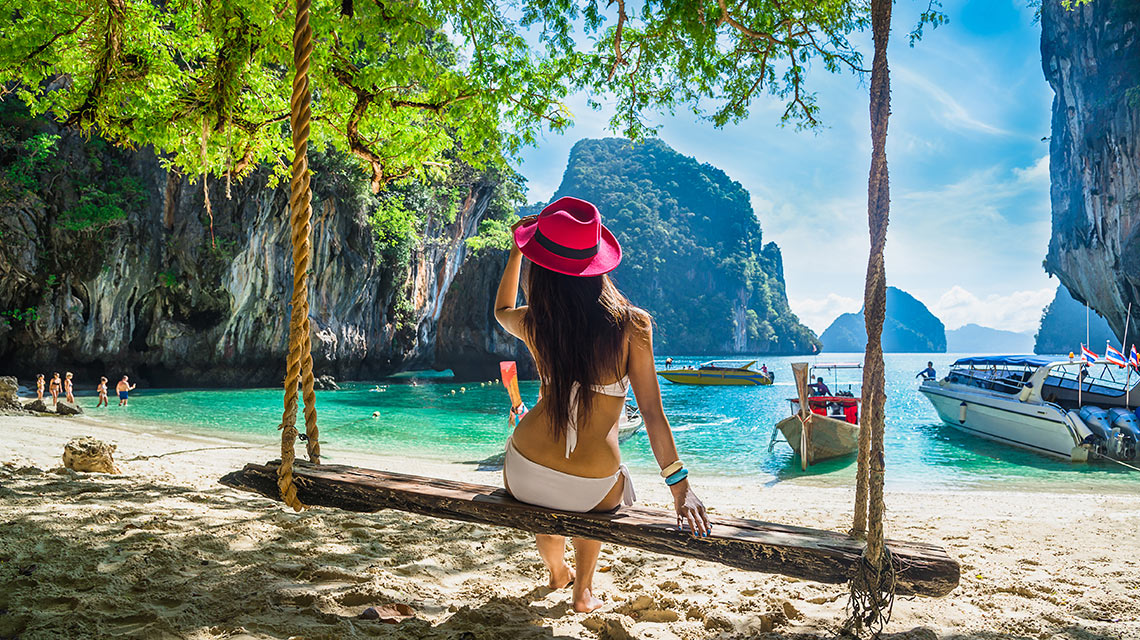 Phuket, one of the most stunning islands in the world

We're not just telling you what to do there, but how to, actually, win a vacation in Phuket! 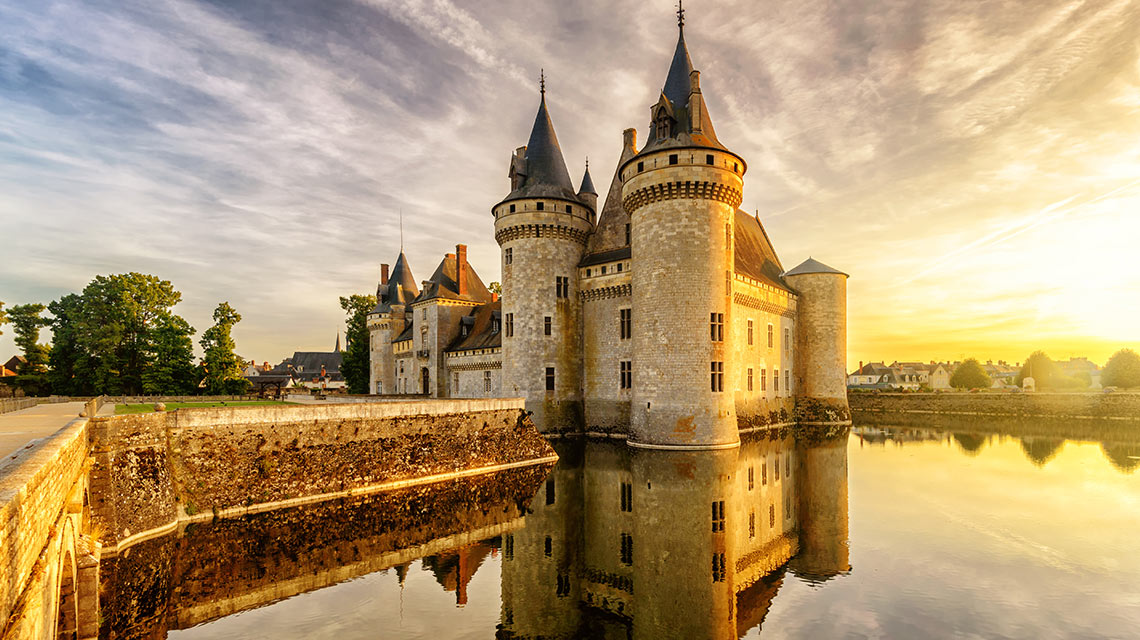 Invitation to the castle

We're not just telling you what to do there, but how to, actually, win a vacation in Phuket!